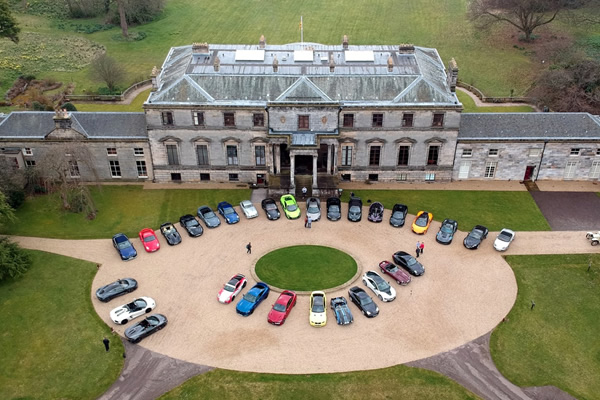 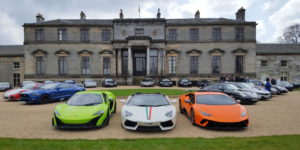 Setting forth from West Fife’s Knockhill Racing Circuit on a glorious spring morning, around thirty privately owned sports cars were welcomed to Broomhall House by Lord Bruce and his father, the Earl of Elgin. Organised by Mark Ryan, the founder of Driving Scotland, the tour featured two of Scotland’s top emerging destinations for supercar owners –  Knockhill and Broomhall – which are less than half an hour apart.

Having parked their cars for a photocall on Broomhall’s gravel sweep, Driving Scotland’s members and guests were given a tour of the house and were shown a special exhibition of press-cuttings and archives relating to Ecurie Ecosse, and the golden years of Scottish motorsport. Lord Elgin (94) who served as President of the Ecurie Ecosse Association, spoke of his memories of Jim Clark, the Scottish racing driver, who died at the Hockenheim circuit in Germany on 7th April 1968, 50 years ago. 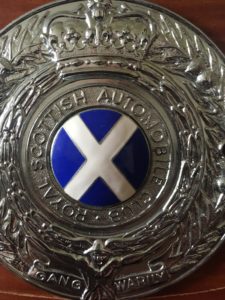 Before leaving Broomhall, Mark Ryan and his guests were each given a radiator badge bearing the insignia of the Royal Scottish Automobile Club which closed in 2001. Lord Elgin also served as Life President of the club. A raffle was drawn from a racing helmet which once belonged to Jackie Stewart. Almost £2,000 was raised to pay for treatment for Garvie Winter (7) from  Dundee,  attending the event with his family, who was diagnosed with leukaemia in October last year.