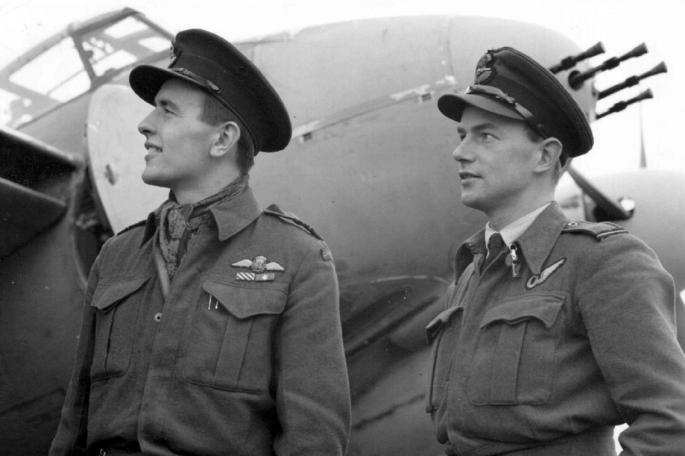 Born at Inverkeilor in Angus, Robert Bruce (1915-2012) was a great-nephew of Victor Bruce, 9th Earl of Elgin, (grandfather of Constance Babington-Smith). A gifted musician, Robert entered the war as a conscientious objector working with the Friends Ambulance Service during the London Blitz. He was eventually persuaded to take a non-combatant role.

Robert travelled to Canada in 1942 and joined the RCAF where he trained as a navigator at Mount Hope, Ontario. From there he was posted to Greenwood, Nova Scotia, where he met Squadron Leader Russell (Russ) Bannock, a Polish-Canadian pilot from Edmonton, Alberta.

Robert and Russ were posted to 418 Squadron RCAF at the Mosquito Operational Training Unit at Ford Aerodrome at Arundel in Surrey.  In support of Bomber Command night bombing, they flew on intruder operations in the de Havilland Mosquito Mk VI, successfully intercepting German night fighters as they returned to base. They shot down 11 enemy planes.

In June 1944, they switched from intruder operations and focused instead on the menace of the V-1 flying bomb. Over the next two months they flew nightly sorties to the Pas de Calais, shooting down V-1s as they left their launch sites, but before they reached their cruising height of 3,000 feet and maximum velocity. Despite their speed the Mosquitos could only intercept the V-1s  by diving from a height of 10,000 feet. Within two months they notched up a legendary score of 19 hits, both receiving the DFC.

When Russ transferred to 406 Squadron RCAF, Robert followed him. At the end of the war, Robert joined 29 Squadron, as navigation officer.

After the war, Robert trained as a music teacher. In 1957 he published a Symphony in B flat dedicated to Russ Bannock. The work was premiered by the Toronto Symphony Orchestra and later performed by the Czestochowa Philharmonic Orchestra, who recorded it in Poland in 1999.