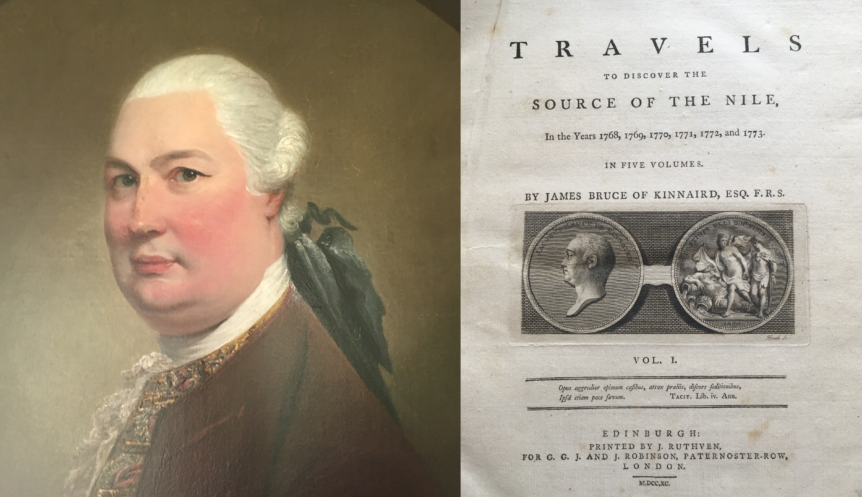 Featuring an epic African journey, Return to the Nile is a National Geographic commissioned biopic marking the 50th anniversary of Sir Ranulph Fiennes’s 1969 pan-African odyssey. The film follows the Fiennes cousins, Ranulph and Joseph, as they pursue the former’s footsteps.

At Broomhall House memories of a much earlier – and just as ambitious – Nile journey can be found in the library. Over 250 years ago James Bruce of Kinnaird left Scotland for North Africa, and disappeared for 11 years, returning with a story so bizarre that no one believed him. Arriving in Algeria in 1763, he travelled to Syria, and then to Egypt where he went up the Nile as far as Aswan. His final destination was Gondar, the historic capital of Abyssinia.

On 14th November 1770, he found a spring at Gish, flowing into Lake Tana – the headwater of the Blue Nile – and claimed the discovery as the source of the River Nile.

He arrived home in 1774 after an exhausting journey which included a trek of 1,200 miles across the Nubian desert on foot. In London his travel exploits however, became a subject of ridicule. Horace Walpole wrote, “There is just returned a Mr. Bruce who has lived for three years at the court of Abyssinia, and breakfasted every morning with maids of honour on live oxen”.

Returning despondent to Scotland, Bruce took fifteen years to write up his journals, publishing the 3,000 page Travels to Discover the Source of the Nile (1768-73) in 1790. It was an overnight success and sold out within 32 hours.