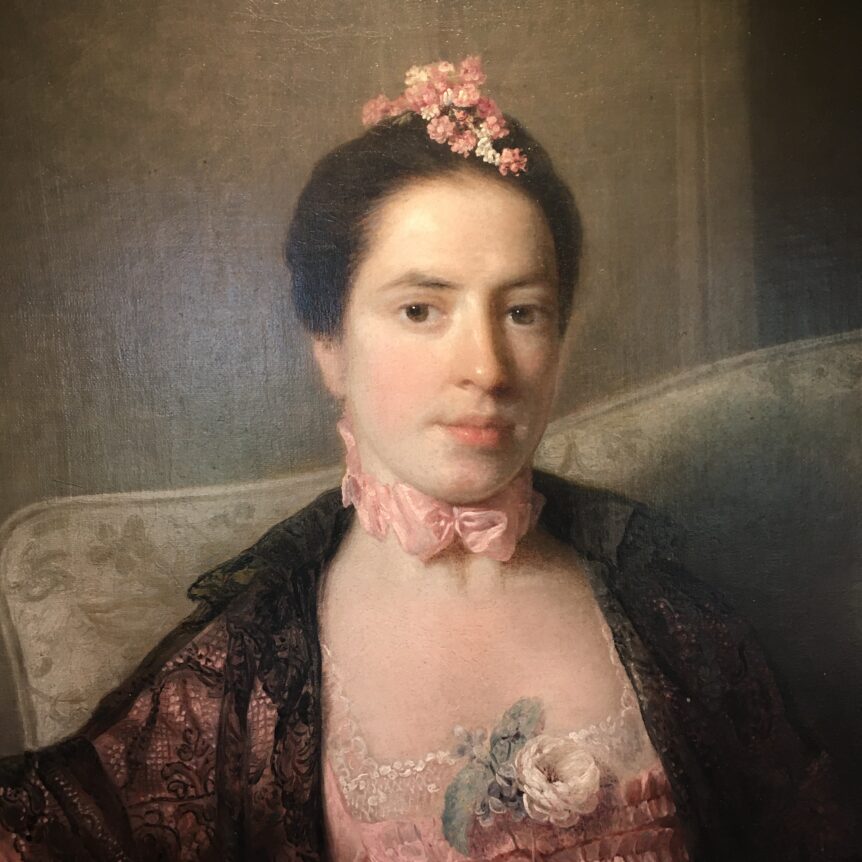 Married in 1759 at the age of 18 to Charles, 5th Earl of Elgin and 9th Earl of Kincardine, Martha Whyte brought up a family of eight children in 12 years, though only four survived into adulthood. Martha was born in London and orphaned by the age of five. Her father Thomas Whyte, a banker from Kirkcaldy, was a business partner of James Coutts who established a bank in 1755.

Martha lost her husband Charles in 1771 at the age of 39. For the next 20 years she ran the family estates, often remotely from London, where she took her surviving children to be educated. She corresponded daily with her agent in Scotland, managing a minerals-processing industry, which included coalmining, lime-burning and salt-panning.

Martha’s lime mortar built the New Town of Edinburgh and contributed to the agricultural revolution that was transforming the Lothians, Perthshire, Angus and Morayshire. When the kilns stopped burning in the 1930s over 11 million tonnes of limestone had been quarried at Broomhall. Martha’s role had been critical in nursing the business in its infancy.

In 1796 she was appointed as Governess to Princess Charlotte Augusta, the only grandchild of George III and Queen Charlotte. In this role she managed a royal household at Blackheath and at Carlton House, and provided a stable environment for the princess whose parents, the Prince and Princess of Wales, were engaged in an acrimonious separation. Martha relinquished this responsibility in 1804. She died in 1818, and was buried in Twickenham. An obituary described her life “as spent in the… exercise of piety and benevolence. Her public and private charities were unbounded.”

Born the second youngest child of Thomas Bruce, 7th Earl of Elgin and his second wife, Elizabeth Oswald of Dunnikier, Augusta grew up in an extensive family of 11 siblings. Her childhood was spent in Scotland, London and Paris.

At the age of 25 she was appointed a lady-in waiting to the Duchess of Kent (mother of Queen Victoria), where she remained for 15 years. In April 1861 following the death of the Duchess, she was appointed by Queen Victoria as a resident woman-of -the-bedchamber, principally on the advice of Prince Albert, “with the object of placing his wife under the control of a personality likely to be a benefit to her” (Tidsal:46).

After Prince Albert’s death from typhoid fever in November 1861 the Queen became increasingly dependent on Augusta’s good humoured resilience. Indeed Augusta found herself thrust into the centre of the private life of the Royal Family, in a curious replay of her grandmother’s Martha’s role as guardian to Princess Charlotte. Whereas Martha has been given the nickname Eggy by her royal charge, Augusta was known as Guska by Queen Victoria’s younger children. 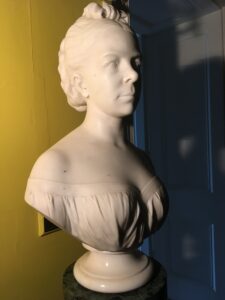 In 1862, Augusta announced her intention to leave Royal service and marry Arthur Penryhn Stanley, who had been appointed Dean of Westminster. Although she was devoted to the Queen, the emotional burden placed on her had become “a considerable bondage”. On hearing the news Victoria exclaimed with some vexation, “My dear Lady Augusta…has most unnecessarily decided to marry!!”

Released at last from 18 years of palace life, Augusta turned the Deanery into a fashionable salon for writers. Together with her sister Charlotte who had married the poet Frederick Locker, she frequently hosted the great literary figures of the day including Dickens, Tennyson, Arnold, George Eliot, Ruskin, Thackery and Trollope. In 1869 she persevered in coaxing Queen Victoria out of mourning, and held a reception for her at the Deanery, introducing her for the first time to Thomas Carlyle and Robert Browning. 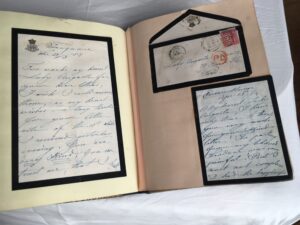 When Augusta died in 1876 the Spectator commented that “London has lost one of the few connecting-links between the uppermost, the middle, and the lowest layers of English society…one of the most intimate of the Queen’s personal friends, she had yet a very large circle of friends in the middle- classes, while the poorest…found in her sympathy and tenderness” (Spectator 4 March 1876).

In an unprecedented breach of protocol the Queen attended Augusta’s funeral at Westminster Abbey and erected a monument near the Royal mausoleum at Frogmore. She confided to her diary: “Oh what it means to lose that dear friend who was everything to me”.

Constance was one of nine children of Elizabeth Bruce whose father Victor, 9th Earl of Elgin served as Viceroy and Governor General of India. Elizabeth accompanied her parents to India in 1894 and married her father’s private secretary, Henry Babington Smith in Simla in 1898.

Educated privately, but denied a university education, Constance joined the WAAF (Women’s Auxiliary Air Force) in December 1940 and was assigned to the photographic reconnaissance unit (PRU) at Heston Airfield. In 1941 she was promoted to Flight Officer and sent to RAF Medmenham, Buckinghamshire. It was here that Frank Whittle, inventor of the jet engine, found himself captivated by her charm and her scent. She explained she wore Guerlain L’Heure Bleu to offset the masculinity of her uniform. 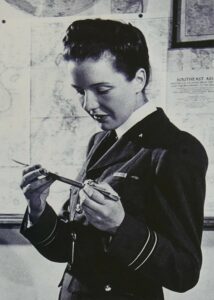 In 1943, by now heading a team of 11 photographic interpreters, Constance discovered several V1 rocket launch pads at Peenemunde on the Baltic coast.  This was the first sighting of the Nazis’ long-range flying bomb programme, and following her breakthrough, a further 96 launch sites were found.

The Allies responded by launching Operation Hydra in August 1943 and thereafter, Operation Crossbow, which focussed intensive aerial bombing on German launch sites. It was a race against time. Shortly after D Day, in June 1944 the Germans launched the V1 bombs on London. In September, the V2’s were launched from sites in Poland and the offensive was stepped up.

By the end of 1944, when the V1 launch pads all had been neutralised, at least 100,000 homes had been destroyed in London. Without photographic intelligence, enemy damage to property and loss of civilian life would have been infinitely worse. In recognition of her work Constance was awarded the MBE.

Following the surrender of German forces in May 1945, Constance transferred to the Pacific theatre as a photographic interpreter and took part in the final stages of the war with Japan, searching for evidence of launch sites. She was awarded the U.S. Legion of Merit in 1946. After the war, she published an account of wartime intelligence-gathering as Evidence in Camera. Her wartime exploits were immortalised in the 1965 film, Operation Crossbow where her role was portrayed by Sylvia Syms.