Building on the success of the 2021 Scottish Torque Show, over 170 classic and supercars assembled at Broomhall in early September. Hosted jointly with the RAF Benevolent Fund and Driving Scotland, the annual event has become a major fundraising event for the Benevolent Fund. Amidst several military themed attractions  – including a flight simulator and the cockpit of a Tornado jet – drivers and their guests were entertained by a 1940s musical performance given by the McAndrews Sisters. 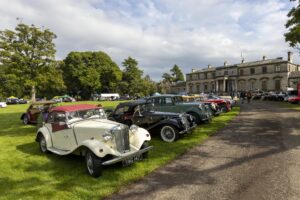 Historic MG cars lined up in front of Broomhall House

The Spirit of the Show trophy was awarded to Rob Onslow who arrived in a very original looking 1700cc Alvis 12/50 Special, dating from 1930. Although the car belongs to Stephen Leckie, Rob is a frequent driver, who explained his attraction to the Alvis: “When taking her out I just can’t get the smile off my face, whether it’s a warm sunny day with sleeves rolled up or cold and wet, flicking the rain out of my eyes…she’s an absolute joy to drive”. 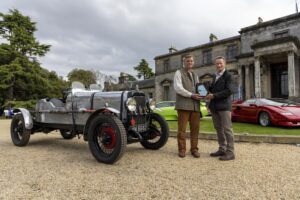 With a licence granted by the Civil Aviation Authority, the grass parks surrounding Broomhall House became a STOL (Short Take Off and Landing) airfield, allowing historic and contemporary aeroplanes to arrive and depart throughout the day. Aircraft taking part included a 1950s Cessna I-19/0-1 Bird Dog Observation aircraft which saw service with the United States Army in Vietnam, a Piper Super Club and a brace of Eurofoxes. 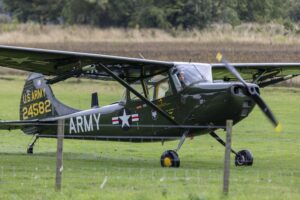