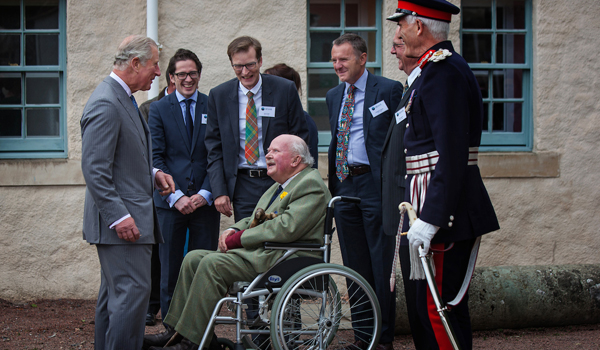 A visit to Charlestown in Fife on Friday 8th September at the invitation of the Scottish Lime Centre Trust brought Prince Charles (HRH the Duke of Rothesay) to one of Scotland’s oldest industrial settlements. Charlestown was founded as a model industrial complex in the 1750s by Charles Bruce, 5th Earl of Elgin on his estate at Broomhall. Over a period of 200 years Charlestown was operated as the principal source of limestone in Scotland for conversion as an agricultural fertilizer and a building mortar. Over 11 million tonnes of rock was extracted from its quarries and burned in its kilns.

Although the lime industry closed in the 1950s, the Bruce family has provided land and buildings on Broomhall Estate to the Scottish Lime Centre Trust since 1994. The Trust has established a centre for excellence in traditional construction technology and skills training, and has pioneered the revival of lime as a mortar and render in the conservation of Scotland’s traditional buildings. During his visit to the Lime Centre, Prince Charles presented a certificate to the 20,000th trainee to have completed a course in traditional craft skills.

HRH Duke of Rothesay (Prince of Wales) at the Scottish Lime Centre Trust, Charlestown, Fife, in conversation with Lord Elgin and the Lord Lieutenant for Fife, Mr. Robert Balfour, and invited guests.

Prince Charles was welcomed to Charlestown by Andrew Bruce, 11th Earl of Elgin (93) – the 37th Chief of the Bruces – who still lives at Broomhall. Lord Elgin remarked that although several members of the Royal Family have visited Broomhall House, it was the first Royal visit to Charlestown since the village was laid out in the reign of George II: “We are an old family” he said “and we were closely involved in the development of Scotland as an industrial powerhouse. But we are now fully engaged in developing a post-industrial economy”.

He congratulated the Lime Centre for providing such an interesting experience for the Prince: “It is simply wonderful to witness the revival of craft skills by young people” he said: “ I’m sure that His Royal Highness was deeply impressed by what he found at Charlestown”.