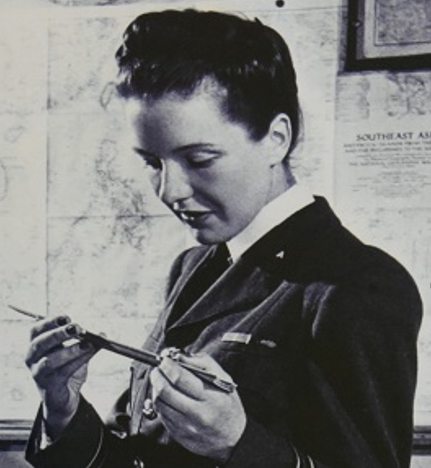 Constance Babington-Smith (1912-2000), a grand-daughter of Victor Bruce 9th Earl of Elgin, joined the WAAF in 1939 as an Assistant Section Officer. In 1941 she was posted to the Photographic Reconnaissance Unit (PRU) at RAF Medmenham, where she was later joined by her brother Bernard. The unit analysed photographs taken by de Havilland Mosquitos and Spitfires flying at altitudes of up to 44,000 feet. Promoted to Section Officer in 1943, Constance set up an interpretation section which used stereoscopes to study aerial photography in 3D.

In June 1943 Constance revealed the testing station for the Luftwaffe’s early jet-engine fighters – the Messerschmitt Me 262 and Me 163  – at Peenemunde. She was first person to identify the scorch marks which the engines left on the runway, and briefed Frank Whittle on her discovery. Later Whittle recalled her perfume, Guerlain’s l’Heure Bleue, as “Air Commodore’s Ruin”. 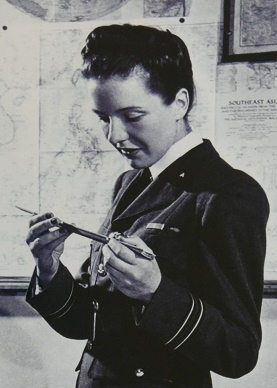 In November 1943 Constance identified the intended launch sites for Germany’s V-1 flying bombs. Her discovery of a ramp at Peenemunde – which had been set up to test the V-1 – revealed the devastating potential of the Nazi’s long-range missile programme. In May 1944, she discovered a V-2 rocket preparing to launch.

In an attempt to destroy all manufacturing facilities and launch sites associated with rocket propulsion and V weapons the Allies launched several bombing raids. In August 1943, Operation Hydra was unleashed to destroy the site at Peenemunde. In December 1943 Operation Crossbow was launched to destroy all sites associated with the V weapons. The operation and associated counter-measures continued until 2nd May 1945. Although 2,500 V weapons were launched successfully at targets on the UK mainland killing over 9,000 people, the loss of life was considerably less than Hitler had intended.

For the final stage of the Pacific war Constance transferred to the United States Air Force where she continued her aerial reconnaissance. She was awarded the US Legion of Merit.